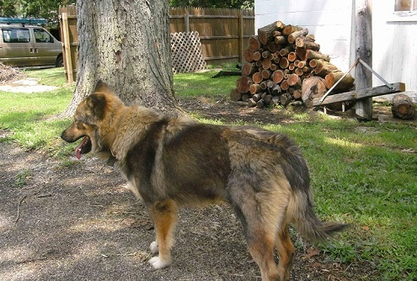 Dance is loyal to a T and very obedient. He's not really been headstrong but he is a bit dog aggressive on the home domain. He's an alert watchdog and a good guard dog, refraining from chasing or attacking on command instantly. I can turn him on and off like a light switch, from aggressive to sociable. He's a good tracker, having helped locate 3 different lost dogs during the past six months, one in the snow last winter. He is also very grateful for his food every day, always wanting attention before eating and to show his gratitude. (05/25/13).

An 8 year old bundle of consistency and energy, he was an abandoned dog I found at about 3 1/2 months of age. The vet believes he is primarily Australian Shepherd, maybe some German Shepherd. I agree, and believe that he probably has a fair amount of Coyote blood in him, as well as some Chow Chow. I've had some , and know others who have, experience with "Coy-Dogs", and they are very loyal & intelligent canines, no more apt to bite than any other dog, and, from what I have seen, are more apt not to bite unless there is a reason to. I've also seen some part Wolf dogs, with them, well....better to err on the side of caution if they don't know you.
I have taken my time training Dance, because he is the star of Dog Training Vol. II, and my schedule has been tight, but I am ready to step up the intensity level with him soon.
He does come here, sit, down, stay, heel to walk/side, stop and appears to have good watchdog instinct. He also takes, holds & gives an object well, especially for being as rambunctious as he is (he is also in my video Fetch & Basic Tracking). He loves to play with the other dogs, loves attention and is very obedient on what he knows.
Dance has been very adept at WAIT for several months now, and just started FETCHING all on his own, after about 5 minutes of training per day on that task, 3-4 days per week (a bare minimum of training on a new task).

AROUND 8 YRS OLD AS OF MAY 2016, A MALE MIX OF AUSTRALIAN SHEPHERD, CHOW & COYOTE, VERY SMART & OBEDIENT, LOYAL, VERY ENERGETIC.