Hammer, the offspring of a male Chocolate lab and a female Black lab, has a rather interesting history & personality. He showed up at my place in December of '07, and within an hour, had been in minor altercations with Whopper, Boots and Mack. I chained him up, figuring that the owner would be around looking for him, but doing that & running ads produced no claimant. After 3-4 weeks I started training him, and had to retrieve him from the dog pound once, as he slipped a clip.
Three or four months after he showed up, an older friend of mine stopped, wondering how I had ended up with his dog, after he had escaped from his kennel, Hammer being a poor kennel dog, but doing okay on a chain. Joe told me just to keep him, as he had obtained a bold & beautiful English Black Lab.
Hammer is an experienced duck dog with the late Joe Necessary, and possibly on geese with an owner before Joe. He is possibly hyper, running in circles all day long & half the night, loves to fetch, and will come, sit, down, up, heel to side & walk, stay, stop, wait, & round the house. He mouths the retrieved object, is quick on the retrieve in spite of being a bit stiff in the hind legs, and almost walks on the water going after an object. Though having a tendency to fight some dogs who growl at him out of dominance, he is good with people, probably having had to fight for food during the time between Joe and myself.

When I first met Hammer, he showed up a stray in December of 2007, and within an hour, he had been in fights with Whopper, Boots and Mack, at three different times, which I quickly broke up, then chained him to an extra house. I asked all around Roann and put a couple of ads up, but couldn't find the owner. I used him in my video, DOG TRAINING VOLUME 1-Serious Inquiries Only, under the name of Brownie, later that winter. After a few weeks of nobody claiming him, I started training him, while continuing to seek his owner. In the following spring, an older friend of mine stopped, and asked me how in the world I got Hammer. Seems he hates being in a kennel, and apparently, he is a living example of "when there's a will, there's a way". I offered him back to Joe, but he said to go ahead and keep him, especially since he had already obtained the beautiful English Black Lab. When he showed up at my place, he had been gone from Joe's for 2-3 months then. He was skinny and mean, and his coat was more of an orange color than brown. His coat has been a darker, almost chocolate brown for 2-3 years now, and he keeps weight on more also.
Hammer already knew how to retrieve when I began training him, although I have taught him a few finer points on the task. He is amiable with people, and either indifferent to or hostile towards, other dominant dogs. He does not get along well with Mack at all, finally tolerates Whopper, does well with Boots, undecided with Dance, and makes playful advances to Sport, whom returns it with a "righteous indignation".
Hammer likes attention, although doesn't require abundant amounts at a time, is a decent watch dog, loves to fetch (finally without breaking), and performs the following tasks: heel to walk on & off leash, stop, on & off leash, wait, sit, down, up, around buildings either way, is housebroken,  come when called, close ( stay within 30-45 yards of handler when in the field, and checks in frequently), and 'watch 'em'.
Hammer has 3 siblings in/around Roann, one dead now. Originally owned by Ray Lyons, and then by Joe Necessary, just before me.
Hammer would likely get along with Mack, having mellowed out aggressive wise during the past few years, but Mack can't stand him (or Whopper for that matter. Hammer was 12 years old in December of 2016, born in 2003. 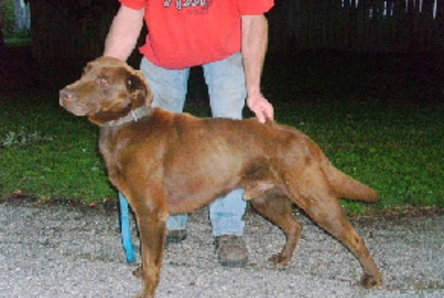 12 YRS OLD AS OF MARCH OF 2016, LOVES TO FETCH, EXPERIENCED ON DUCKS, BIRDS & MAYBE GEESE (W.PREVIOUS OWNER), WILL HUNT FROM LAND OR BOAT,  FULL OF ENERGY BUT SLOWER NOW, PREFERS NO OTHER DOGS AROUND, BUT NOT AGGRESSIVE TOWARDS OTHER DOGS UNLESS APPROACHED BY A DOMINANT DOG. PRETTY DECENT WATCHDOG WITH GUARD POTENTIAL.