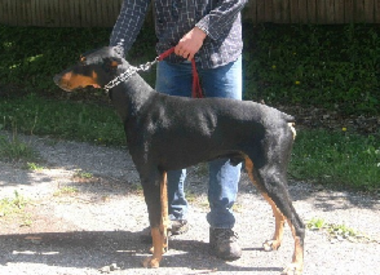 MACK (short for McHALE)-As of April '09: A 4 1/2 year old, purebred, male Doberman Pinscher, whom was raised in the country with two other Dobermans. He was raised well, though not trained to do much more than come when called and to stand down when commanded. He had a habit of chasing squirrels & birds, though not cats to much of a degree.
He was a bit of a challenge to train, being stubborn & headstrong. He is still a bit on the headstrong side. He is always obedient, but does have a tendency to want to obey some commands on his timetable rather than mine. He is people friendly/tolerant yet wary, an excellent watch/guard dog, whom will stand his ground when need be. He does have a tendency to want to be pack leader amongst the dogs, especially with Whopper, whom is the dogs' pack leader, and probably wouldn't miss most of the other dogs if they were gone, especially Whopper, with the exception of the Mountain Feist, whom he adores. But he does quite well at getting along with the others when out in the field, and is sometimes playful with the other big dogs, especially Boots but not with Hammer.
Mack responds to around 25 different commands verbally, and to many of those by hand command. I have jogged him  6 miles at 100 degrees, which doesn't faze him much at all (he's usually ready to turn right around & do it again). Overall, he's a joy to have around, being both serious, and a clown at times.
Note: though Dobermans can be mean as snakes, the way to get great results from training is to earn their trust, confidence and respect, and not correct too harshly. This seems to be more critical with Dobes than with a lot of the other breeds. Though harsh with intruders, they are very sensitive to their masters.(click for photo)
As of 02/14/2013: Mack has recovered well from a serious broken leg in the summer of 2011, after being hit by a car one night. The vet also castrated him that same summer due to an enlarged prostate, and has held weight much better, and feels better. He also became easier to manage, but still has the same guard ability and fierceness. During the time he was recovering from the broken leg, he didn't do much for about 5-6 months besides going outside a couple times per day to relieve himself, then I started walking him a little each day and by summer of 2012 I was jogging him again, though I didn't jog much that summer due to the hotter than normal summer. He lost a tremendous amount of stamina during the recovery, but by that fall, he had regained most of it and his limp is now almost imperceptible much of the time. I give him an alfalfa pill every day when I feed, and I'm sure it helps with flexibility. The other day at the vet they were well pleased with how the leg turned out, as there were several complications, including a bad infection which caused a section of the leg meat to fall off, about 1 1/2" x 3 1/2", exposing both bones between the knee and ankle. For a video series on the stages of Mack's injury, steps we took to save it, and the subsequent results, go to 'Black and Blue or More Discipline for you' on the Canine Health Tips Page or CLICK HERE. THIS IS A LINK I FAILED TO GET ONLINE DURING THE REBUILDING OF THIS SITE-I WILL HAVE IT ON SOON! (01/14/2017)