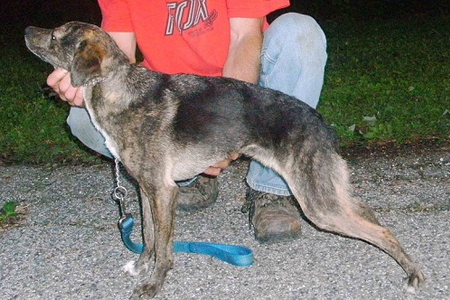 AROUND 9 1/2 YRS OLD AS OF MARCH 2016, LOYAL, SMART, PROTECTIVE & AGGRESSIVE, CURIOUS & MISCHIEVOUS, LOVEABLE TO FRIENDS BUT VERY WARY OF STRANGERS. OBTAINED FROM CINDY, WABASH, IN AT 1 1/2 YRS OLD

He is a Mountain Feist, 9 1/2 years old, having been in several rescue shelters and 3 or 4 different homes, and was mistreated due to a lack of understanding of the Feists' protective nature, but has turned out to be a very personable, intelligent and obedient guy. He is the only one that Mack will share his food with or continually play with.
Initially, Sport would run up to a visitor and bite them, or bite me once I stopped petting him. He is now much more stable and likable, though still wary, protective and totally fearless. I haven't worked him much yet, aside from walks, a regular 3-4 mile jog, and a few squirrel hunts, as he will be in a video I'm getting ready to work on. At the present, he will sit, down, up, heel to side & walk, stop, wait, come here, in/out of vehicle, stop chasing on command & tree a squirrel. He is not only very watchful & wary, protective and absolutely fearless, but is also a gentle lap dog. About his only bad habit had been getting into things/chewing on things, which is why he stayed in a crate while I was gone, or outside in the warm months. It took me a few weeks to get him mostly broke of those habits, and within 6 months or so I had no more problems with the issue. Over a period of 5 years, I've rarely had to correct him for that.

When I first obtained Sport, he was the first small dog that I had ever owned, trained or handled, and though I now think the world of him, I actually took him from Cindy quite reluctantly, and a couple of weeks after taking him, began to see the viewpoint of the people whom eat dogs. I had been around small dogs before, and had been quite impressed by their attributes, such as the Fox and Rat Terriers' fearlessness and energy and the Chuauau's excellent hearing and sixth sense, but this dog, a Mountain Feist, was a case. He had been in several homes before Cindy, and had been abused. The last case was with a mother whom owned him. Her daughter and the daughter's boyfriend had been play wrestling, and Sport bit the boyfriend, apparently pretty hard. That probably wasn't the first person Sport had ever bitten, but at least in that case, it wasn't the dog's fault. Mountain Feists are quite wary, protective and aggressive. They amount to being a hunting dog that can double as a pint-sized guard dog. His canine teeth are nearly as long and big around as many of the 60-70 pound dogs.
A dog owner should become aware of what the attributes and characteristics are, of a dog they own or plan to own. You simply don't fool around in the presence of a protective dog. The boyfriend is fortunate that it wasn't a Rottweiler, Akita or Doberman that he got nailed by, just to mention a few.
Anyway, when I first got him, he was bowed down in fear, tail (stub) down, and would just shake if you even looked at him cross-eyed. He would let me pet him, but whenever I stopped petting him, he would try to bite me. He relieved himself in the house, which took several weeks to remedy, and once he began to trust me, he was inclined to try and bite anyone else. He was truly a basket case.
Now, he is quite a character. He listens to me, and is confident and secure, still very wary of strangers, protective and aggressive. He is still inclined to bite strangers, but will refrain on command, and is much more sociable with others when I am around. I have socialized him quite a bit, though not overly so, in order to keep the guard ability edge on him. He likes to learn and takes pride in doing various commands. He loves to tree squirrels and is quite an amiable lap dog.
Adam and Tiffany stayed with me a couple years ago for a few weeks, and after a week or so, Sport took to Tiffany quite well, though not to Adam, simply because Adam was wary of Sport and kept his distance.
Sport is a very dominant dog with the other dogs, but only aggressive to Hammer, playing well with the other dogs. Hammer is not aggressive as such with the other dogs, but is very defensive, so him and Sport do not get along, due to Sport's attitude toward him. On occasions when Sport, in the process of roughhousing with Mack, gets out of line, Mack puts him in his place, though I usually do before mack needs to, on a word.