12 YRS OLD AS OF DEC. 2016, LOVES TO FETCH, EXP. ON DUCKS, BIRDS & MAYBE GEESE, WILL HUNT FROM LAND OR BOAT, STAYS SKINNY BUT FULL OF ENERGY, PREFERS NO OTHER DOGS AROUND, BUT NOT AGGRESSIVE TOWARDS OTHER DOGS UNLESS APPROACHED BY A DOMINANT DOG. PRETTY DECENT WATCHDOG WITH GUARD POTENTIAL.

10-11 YRS OLD AS OF APRIL. 2016, SON OF A MALE ENGLISH LAB & LIKELY A FEMALE GREAT PYRANEES, LOYAL & OBEDIENT, LAID BACK, TENDENCY TO ROAM IF ALLOWED TO, NOT NEUTERED, GOOD TRACKER.

A five year old Great Pyranees/Black Labrador mix, he showed up as a stray, via a neighbor. Efforts to find an original owner proved fruitless, so he got a new home, a couple of years ago.
Boots has no aspirations to be the pack leader, and gets along well with the other dogs, standing his ground against dog or human if threatened, but is generally very mellow and laid back.
Boots is a regular jogger with me until the weather gets over 70 degrees, and loves the field & woods. He responds to around 15 different commands by verbal, and I am working with him on retrieval. He loves the water, is loyal and obedient, and very intelligent. Scolding doesn't help much with him, so it is thru mostly positive reinforcement, which works best with him, and an occasional shaking by the scruff. His only fault is hiding(which he's pro at), and running off to roam until either I catch him, or he decides to come back home. The longest he's been gone is ten hours, and I almost have him broke of that. I suspect that his original owner was hunting him, and either he took off and was never found, or his owner dumped him because of the tendency to roam

Boots is obedient and loving, relishing attention. He likes playing with the other dogs, though he can be quite a loner as well. He is faithful, attentive, obedient, alert, and discerning, being a relaxed canine. When Boots growls at someone, there is a real problem. He is a good tracker who, along with Dance, has help locate 3 different missing dogs during the past six months, one last winter in the snow. (05/25/2013). 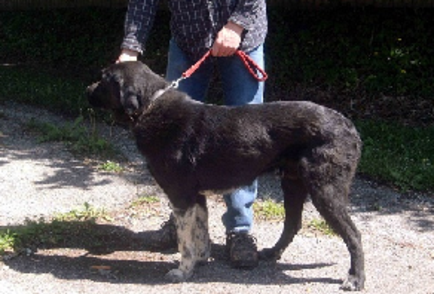 When I first met Hammer, he showed up a stray in December of 2007, and within an hour, he had been in fights with Whopper, Boots and Mack, at three different times, which I quickly broke up, then chained him to an extra house. I asked all around Roann and put a couple of ads up, but couldn't find the owner. I used him in my video, DOG TRAINING VOLUME 1-Serious Inquiries Only, under the name of Brownie, later that winter. After a few weeks of nobody claiming him, I started training him, while continuing to seek his owner. In the following spring, an older friend of mine stopped, and asked me how in the world I got Hammer. Seems he hates being in a kennel, and apparently, he is a living example of "when there's a will, there's a way". I offered him back to Joe, but he said to go ahead and keep him, especially since he had already obtained a beautiful English Black Lab. When he showed up at my place, he had been gone from Joe's for 2-3 months then. He was skinny and mean, and his coat was more of an orange color than brown. His coat has been a darker, almost chocolate brown for 2-3 years now, and he keeps weight on more also.
Hammer already knew how to retrieve when I began training him, although I have taught him a few finer points on the task. He is amiable with people, and either indifferent to or hostile towards, other dominant dogs. He does not get along well with Mack at all, finally tolerates Whopper, does well with Boots, undecided with Dance, and makes playful advances to Sport, whom returns it with a "righteous indignation".
Hammer likes attention, although doesn't require abundant amounts at a time, is a decent watch dog, loves to fetch (finally without breaking), and performs the following tasks: heel to walk on & off leash, stop, on & off leash, wait, sit, down, up, around buildings either way, is housebroken,  come when called, close ( stay within 30-45 yards of handler when in the field, and checks in frequently), and 'watch 'em'.
Hammer has 3 for sure siblings in Roann, and a possible fourth. Originally owned by Ray Lyons, and then by Joe Necessary, just before me.
Hammer would likely get along with Mack, having mellowed out aggressive wise during the past few years, but Mack can't stand him (or Whopper for that matter. Hammer was 12 years old in December of 2016, born in 2003. 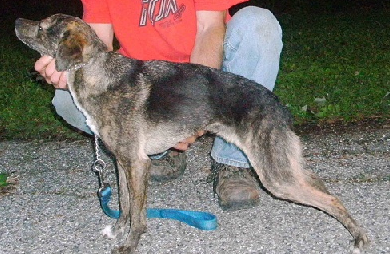 When I first obtained Sport, he was the first small dog that I had ever owned, trained or handled, and though I now think the world of him, I actually took him from Cindy quite reluctantly, and a couple of weeks after taking him, began to see the viewpoint of the people whom eat dogs. I had been around small dogs before, and had been quite impressed by their attributes, such as the Fox and Rat Terriers' fearlessness and energy and the Chuauau's excellent hearing and sixth sense, but this dog, a Mountain Feist, was a case. He had been in several homes before Cindy, and had been abused. The last case was with a mother whom owned him. Her daughter and the daughter's boyfriend had been play wrestling, and Sport bit the boyfriend, apparently pretty hard. That probably wasn't the first person Sport had ever bitten, but at least in that case, it wasn't the dog's fault. Mountain Feists are quite wary, protective and aggressive. They amount to being a hunting dog that can double as a pint-sized guard dog. His canine teeth are nearly as long and big around as many of the 60-70 pound dogs.
A dog owner should become aware of what the attributes and characteristics are, of a dog they own or plan to own. You simply don't fool around in the presence of a protective dog. The boyfriend is fortunate that it wasn't a Rottweiler, Akita or Doberman that he got nailed by, just to mention a few.
Anyway, when I first got him, he was bowed down in fear, tail (stub) down, and would just shake if you even looked at him cross-eyed. He would let me pet him, but whenever I stopped petting him, he would try to bite me. He relieved himself in the house, which took several weeks to remedy, and once he began to trust me, he was inclined to try and bite anyone else. He was truly a basket case.
Now, he is quite a character. He listens to me, and is confident and secure, still very wary of strangers, protective and aggressive. He is still inclined to bite strangers, but will refrain on command, and is much more sociable with others when I am around. I have socialized him quite a bit, though not overly so, in order to keep the guard ability edge on him. He likes to learn and takes pride in doing various commands. He loves to tree squirrels and is quite an amiable lap dog.
Adam and Tiffany stayed with me a few years ago for a few weeks, and after a week or so, Sport took to Tiffany quite well, though not to Adam, simply because Adam was wary of Sport and kept his distance.
Sport is a very dominant dog with the other dogs, but only aggressive to Hammer, playing well with the other dogs. Hammer is not aggressive as such with the other dogs, but is very defensive, so him and Sport do not get along, due to Sport's attitude toward him. On occasions when Sport, in the process of roughhousing with Mack, gets out of line, Mack puts him in his place, though I usually do before mack needs to, on a word.

SPORT-He is a Mountain Feist, 2 1/2 years old, having been in several rescue shelters and 3 or 4 different homes, and was mistreated due to a lack of understanding of the Feists' protective nature, but has turned out to be a very personable, intelligent and obedient guy. He is the only one that Mack will share his food with or continually play with.
Initially, Sport would run up to a visitor and bite them, or bite me once I stopped petting him. He is now much more stable and likable, though still wary, protective and totally fearless. I haven't worked him much yet, aside from walks, a regular 3-4 mile jog, and a few squirrel hunts, as he will be in a video I'm getting ready to work on. At the present, he will sit, down, up, heel to side & walk, stop, wait, come here, in/out of vehicle, stop chasing on command & tree a squirrel. He is not only very watchful & wary, protective and absolutely fearless, but is also a gentle lap dog. About his only bad habit had been getting into things/chewing on things, which is why he stayed in a crate while I was gone, or outside in the warm months. It took me a few weeks to get him mostly broke of those habits, and within 6 months or so I had no more problems with the issue. Over a period of 5 years, I've rarely had to correct him for that.

He is a Chocolate Labrador, around 4 years old now, the offspring of a male Chocolate Lab and a female Black Lab.
Hammer has a rather interesting history & personality. He showed up at my place in December of '07, and within an hour, had been in minor altercations with Whopper, Boots and Mack. I chained him up, figuring that the owner would be around looking for him, but doing that & running ads produced no claimant. After 3-4 weeks I started training him, and had to retrieve him from the dog pound once, as he slipped a clip.
Three or four months after he showed up, an older friend of mine stopped, wondering how I had ended up with his dog, after he had escaped from his kennel, Hammer being a poor kennel dog, but doing okay on a chain. Joe told me just to keep him, as he had obtained a bold & beautiful Black Lab.
Hammer is an experienced duck dog with Joe, and possibly on geese with an owner before Joe. He is possibly hyper, running in circles all day long & half the night, loves to fetch, and will come, sit, down, up, heel to side & walk, stay, stop, wait, & round the house. He mouths the retrieved object, is quick on the retrieve in spite of being a bit stiff in the hind legs, and almost walks on the water going after an object. Though having a tendency to fight some dogs who growl at him out of dominance, he is good with people, probably having had to fight for food during the time between Joe and myself. He was likely abused by one of the owners before Joe, but all in all, he is obedient once a task is learned, and lives to retrieve.

BOOTS, HAMMER & SPORT ON THIS PAGE. SCROLL TO RIGHT FOR PICTURES AND MORE INFO. 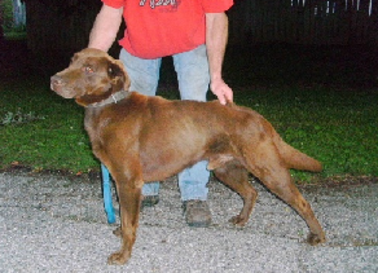 AROUND 10 1/2 YRS OLD AS OF OCT. 2016, LOYAL, SMART, PROTECTIVE & AGGRESSIVE, CURIOUS & MISCHIEVOUS, LOVABLE TO FRIENDS BUT VERY WARY OF STRANGERS. OBTAINED FROM CINDY, WABASH, IN AT 1 1/2 YRS OLD.