History of My Canines

BEGINNING AS OF AROUND APRIL 2009 AND UPDATED OCCASIONALLY
Descriptions of my dogs' attributes, accomplishments and photos are accessible from this page, along with a link with each description to view each dog's photo. I try to provide descriptions in such a way as to illustrate canine handling tips which help encourage viewers. 'Course, this page and the photos are mostly because I am proud of my dogs and the progress we've made, especially since 8 out of the 10 I currently have were adults and somewhat, to excessively, set in their ways when I got them.

The beginning of my serious canine training started with Whopper, a Labrador/Rottweiler mix, an excellent companion and guard/watch dog, illustrated below.
For comments, questions, or constructive criticism email me at noneuntrainable@sleedogtraining.com or call 260-568-3021.

GO TO MY OTHER DOGS 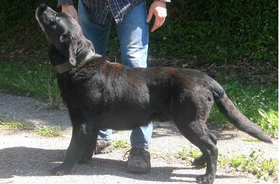 Whopper was the "public relations" dog of my pack, gathering a lot of compliments for being people friendly, yet all business at guarding the door when I'm away and having seldom growled at anyone, as he was discerning and well balanced enough to do so only when necessary.
He is a 9 1/2 year old Black Labrador/Rottweiler in the photo, who I obtained as a 6 week old puppy. He was happy go lucky most of the time, loyal & devoted, watchful, wary when needed, very discerning & discriminate, energetic, obedient to a T (usually), understanding & tolerant, very protective when really needed, a bit spoiled with attention, liked most other dogs and hated cats.
Whopper responded to around 25 different commands verbally, and to many of those by hand command. He loved to fetch on land and in water, and was a strong, steady swimmer, though not a fast swimmer. He was regularly jogged at my side up to six miles, normally 3-4, until he started showing signs of hip problems, which may be the breed, or may have developed from being jogged at too young of an age (due to ignorance on my part). However, at 4 months the vet said he showed signs of possible hip problems in later life when he examined him, so it probably wouldn't have mattered whether I jogged him or not, he'd still have hip issues. As a matter of fact, I believe that working him much was a contributing factor to Whopper living to be over 15 years old. Until a month before his death he was still walked daily, got up and down by himself and showed no signs of pain.
He has had a few issues with Mack, the Doberman (short for McHale), but tolerated him, because of his obedience to me, and was sometimes playful with him, although he would probably rip Mack's ears off and enlarge his rectum at times if he'd been allowed to, as Whopper was the original dog of the present pack. He had also been in several states with me when I was trucking. He had a few possums, raccoons & stray cats under his belt (although he'd refrain from cats when I commanded him to, and since he became too slow to catch them, I used him to chase the troublemakers away).
His biggest claim to fame, at least as far as I'm concerned, was alerting me to potential assaultists or burglars a few times, twice when out on the road driving a big truck and once when camping. (click for photo)
I'd kept Whopper inside during the colder weather for the past four winters (as of 02/14/2013) because of his hips and since he's older. Mack and Whopper had gotten along pretty well while inside together, though I had to work with them at first to help them make the adjustment. Whopper became much more tolerant and just ignored Mack when mack growled at him. A couple of years before Whopper died, he and Mack bumped into each other and Mack got aggressive, but before I could say anything, Whopper stood him down, he at 13 and Mack at nine, with a low, deep throated growl. Whopper still had a nearly iron mouth grip, and could cause some damage if he wanted to.

Dogs like these two that are jealous over the master and somewhat resentful of each other do, however, act much differently when the master is not there with them, being more tolerant of each other. It's kind of like being at peace when there's no bone to fight over. I had to pull them apart a couple times when I first got Mack in '06, but it didn't take real long to instill a certain level of tolerance within each of them.